We will be closed from Thursday 5th November due to the latest Covid-19 Lockdown.
Skip to content

You may be missing all of the beautiful blossoming flora, rich wildlife, and stunning scenery that fill this area of North Devon with so much colour in the summer months. As the nights draw in and the dark evenings, damp weather, and colder days rapidly approach us in the beginning of winter, there is still much to see and do outdoors in and around North Devon to satisfy your need for nature. So, chase away the winter blues, there’s still plenty of wildlife to see if you know where to look.

As the winter months approach, you may notice a different population of birds in and around your garden than during the summer. Some of the garden birds that we have in the UK migrate to warmer climates throughout the winter, such as Blackcaps and Warblers, and we also get visitors from Scandinavian and Northern European species which are escaping harsher winters. 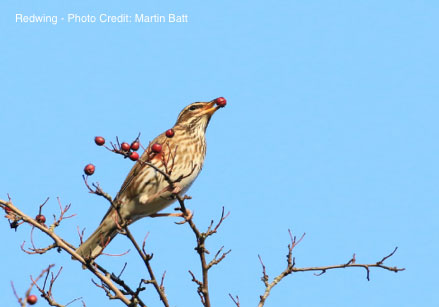 Species like the Fieldfare and the Redwing migrate over to the UK from Northern Europe and Russia in search of food. Redwings are a similar size to Blackbirds with distinct red flanks and light brown stripes across the eyes and head.

The Robin is a well-known bird that for many people represents winter and the festive season. This bird is one of the few that continues to sing throughout the winter, and European Robins frequently join their numbers.

Other native species, such as the Blackbird, Coal tits, Blue tits, Goldcrests (one of Britain’s smallest breeding birds), Chaffinches, and Goldfinches, will remain active throughout the winter. As long as they can find adequate food, these birds are well adapted to survive our wet winters.

There are a few things you can do to help the birds in your garden survive the winter months so they may continue to thrive. Putting out fresh, unfrozen water for drinking and bathing will help to keep them hydrated, providing fatty foods such as fat balls will help with their calorie intake, and leaving your garden ‘messy’ or ‘untidy’ will help by providing lots of shelter in hedges and under thick ivy away from the elements.

Hedgehogs and other hibernating animals are busy feeding and foraging extensively at this time of year to prepare for the cold months ahead. Because they are nocturnal and highly secretive, you may be unaware of their presence in your gardens, but you might be surprised who lives among your garden bushes. 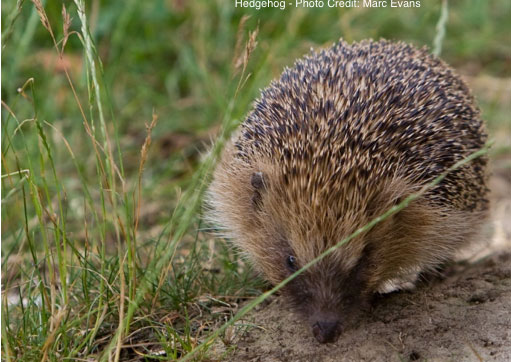 These cute but sensitive little creatures are often grateful of a little help when it comes to food in the winter months as their food sources become limited. If you are able to, leaving a little bit of cat food or specialist hedgehog food (sold in most garden centres) out for them just at it’s getting dark is always appreciated. You could always build a little shelter over the food with a small hedgehog shaped gap in to prevent other animals like house cats getting at the food.

Hedgehogs are also affected by the lack of wildlife corridors in rural and suburban areas, which is becoming increasingly common as more housing is built. To help them out you could leave a little hedgehog-shaped gap between your garden fence and your neighbour’s garden fence to allow them to continue to travel about freely in order to locate enough food.

Because the North Devon area is surrounded by coastal land and estuaries, there are always a large number of wintering shorebirds who take advantage of the wet weather and quieter beaches, making this area ideal for bird watchers. 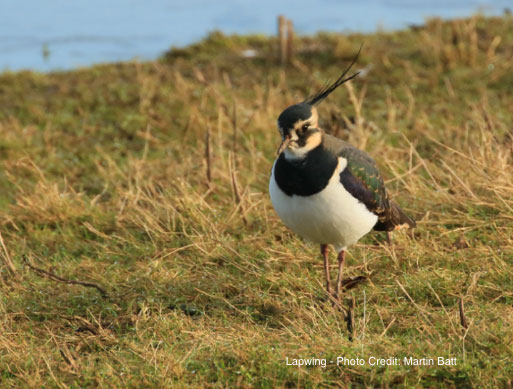 Wading birds like the Curlew, Golden Plover, Lapwing, and native and noisy Oystercatchers flock to the Taw and Torridge estuaries on a regular basis. As many as half a million Lapwings have been known to head to the shores of the UK to escape the colder northern European winters. 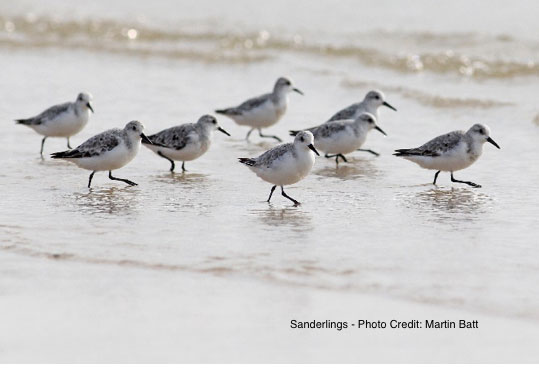 Saunton Sands is the best place in Devon to see Sanderlings, the tiny, almost white wader that migrates here in September and stays through to at least March. They live on the tideline, feeding on tiny crustaceans and are very tempting for dogs to chase. Please don’t allow your dogs to disturb them in the winter – they need all their energy to feed and survive the cold weather. 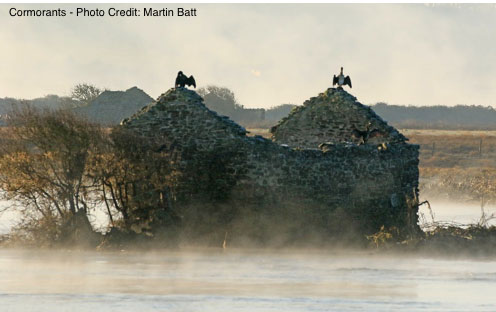 The Cormorant, an outstanding fisher, can also be seen, coming up out of the water for a breath before diving back down to capture its supper, or perched on a rock airing out its feathers after a dive. 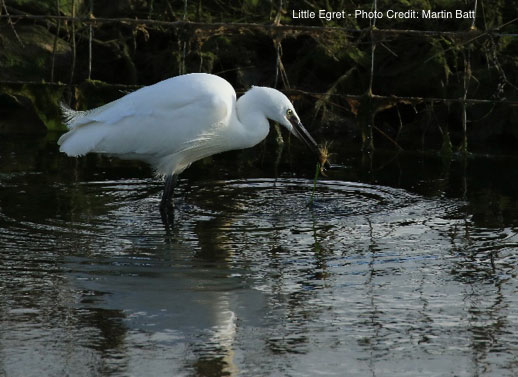 Little Egrets can also be spotted throughout the estuary; formerly an uncommon visitor from over the Channel, this bird is now a more typical sight along the UK’s coastlines and can be spotted on Horsey Island and around the Velator marshes. With their long black bill, long back legs, and yellow feet, they prey on tiny fish and crustaceans.

During the breeding season, they have long plumes that were previously considered more valuable than gold and were smuggled into Europe in the 19th century, causing the Egret population to decline until protective laws were enacted. 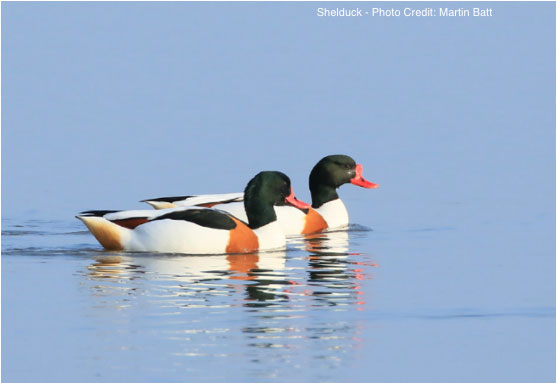 The Shelduck can be found in large numbers throughout the North Devon coast, particularly in the estuaries. Look for the Shelduck’s dark green head, bright red bill, and orangey-brown breast stripe with back wing patches to identify it. It nests underground in old rabbit burrows or tree hollows, and since it competes with rabbits for burrow space, the Shelduck was previously pursued by people in the 19th century, for reducing rabbit abundance as a food source.

Go about an hour or so before high tide to get the most out of your visit to view all of these beautiful shorebirds. This is the perfect time to go bird watching in the estuaries since the incoming tide will drive the birds closer to the coast and away from the mud, making them easier to watch.

Things to do in and around Braunton in the winter

If you’re looking for Christmas gift ideas for loved ones for the upcoming festivities, the North Devon Christmas Market on Saturday 4th December always gives a nice dose of festive cheer to get everyone in the Christmas spirit.

The festive market, which is located in the Caen Street carpark, has a variety of Christmas attractions, including various craft stalls selling unique presents, mulled wine and mince pies from the Countryside Centre, and drop-in crafts activities inside the centre. A trip to the Christmas market is always a good idea.

The RSPB’s Big Garden Birdwatch is an excellent way to get involved with nature from the comfort of your own home while enjoying the wildlife that is close to you. You can participate in the national birdwatch from January 28th to 30th to help identify the species of wintering birds that are dwelling in our gardens around the country.

Take a comfortable position beside a window for just one hour and make a list of all the different types of birds you see and note how many you see. You can then send your observations to the RSPB website via this link: Big Garden Birdwatch

The RSPB will also be hosting some live wildlife footage through YouTube and Facebook, with the opportunity to ask our experts any questions, so make sure you check out their website for more details. 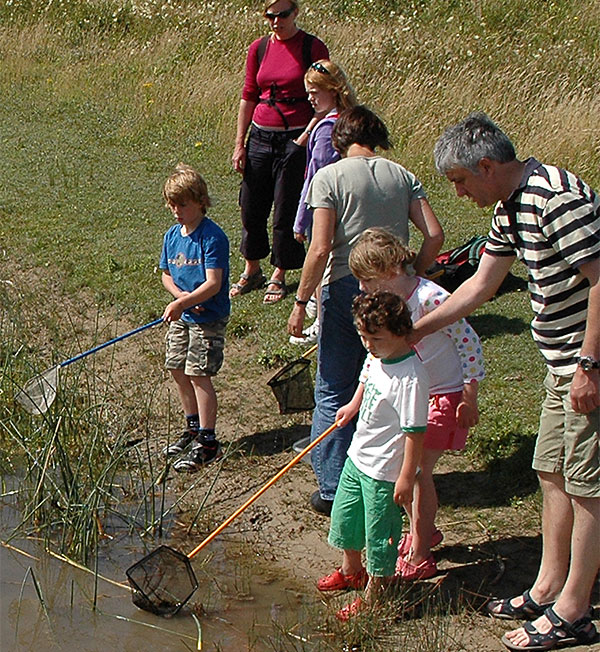 Here’s what you might see today on the Burrows